Buried nearly 570 feet beneath the ground, and stretching over 17 miles on the idyllic French-Swiss border, lies the largest, most powerful machine that humanity has ever produced. The Large Hadron Collider (LHC) is a particle accelerator of unparalleled size and scope that seeks to shed light on some of the greatest mysteries of the universe. By firing protons at nearly the speed of light and crashing them into each other, discoveries relating to the nature of the Big Bang, dark matter, and even parallel universes have begun to emerge. Renowned for its discovery of the Higgs Boson particle, the LHC and the scientists who run it are on the forefront of physics in the modern era.

The Large Hadron Collider was built by the European Organization of Nuclear Research or in French Conseil Européen pour la Recherche Nucléaire (CERN), and is a collaboration between over 10,000 engineers and scientists from over 100 different countries. With a reported cost of over $13.5 billion, it is one the most expensive scientific endeavors in human history, and the scale of the project is sometimes difficult to even comprehend. Thousands of the brightest minds undertook a project to expand our knowledge of our universe, and the results of the project are only recently being understood.

This super collider, the largest machine in the world, contains over 9,500 super-magnets that are over 100,000 times stronger than the gravitational pull of Earth, while seven massive detectors, some over 45 feet high and weighing 28,000 lbs. record data from the experiments. This data encompasses thousands of terabytes and has to be sorted by over 170 supercomputer facilities around the world. The experiments smashing lead ions together have produced temperatures over 100,000 times hotter than the center of the sun.

A project of this magnitude will always elicit skepticism and even downright weird theories. That the collider would cause a black hole that could destroy the planet or that it could open a portal to hell are rumors that abound in the less factually rigorous places of the internet. The reality, while not as salacious, is infinitely more interesting. Innovation & Tech Today recently conducted an onsite tour of the University of Colorado’s supercomputers that process CERN data, with two of the scientists who work with the LHC in Switzerland. Kevin Stenson, professor of physics, and John Cumalat, professor and physics department chair, were kind enough to sit down for an extended interview in order to help us understand what has come of firing protons across this scientific marvel at exceptionally high energies for over a decade.

Home of the Higgs

CERN made a splash in headlines around the world in 2012 when its scientists finally proved the existence of the elusive Higgs particle. It was discovered simultaneously by two competing teams at CERN: CMS and ATLAS (Stenson and Cumalat are members of the CMS faction). About 3,000 people participated in each experiment, with U.S. researchers comprising about a third of CMS and a quarter of ATLAS.

For those of us who are not physicists, it can be hard to comprehend a particle that is so fundamental to our universe. You can’t see the Higgs, and the LHC is the only place on Earth that has the capability to measure it.

A collection of Higgs particles forms a field that affects all of the mass that passes through it in different ways. Some particles drag through the field, and that deceleration increases its mass; other particles shoot right through it, remaining lightweight. One analogy from Brian Greene, a professor of Theoretical Physics at Columbia, is to think of a ping-pong ball submerged in water. If you push on that ping-pong ball, it will feel much more massive than it does if you were to push on it outside of the water. Its interaction with the watery environment, which creates the resistance, has the effect of granting the ping-pong ball mass. The same thing happens with particles submerged in the Higgs field. In short, the Higgs particle explains why different particles have different amounts of mass. 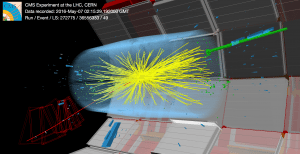 In order to produce a Higgs particle in the LHC, protons are sped up to nearly the speed of light, and then smashed together. The resulting explosion creates mass that can then be measured by LHC sensors. Once in every few billion times this experiment is done (at the rate of tens of millions of collisions per second), a Higgs is created. After trillions of iterations of the experiment, the collection of Higgs is great enough to be statistically significant on a graph. After enough of those graphs, and a fifty-year hunt, the CERN scientists had proven the particle’s existence. The men who initially proposed the particle, François Englert and Peter Higgs, were jointly awarded the Nobel prize in physics in 2013 once their theoretical discovery was finally confirmed by the ATLAS and CMS experiments.

The Importance of the Higgs

For 40 years, physicists have used one theory, known as the Standard Model, which explains how particles interact with each other in the universe. Basically it shows how the world around exists, but there are some phenomena like dark matter, that the theory does not account for. He said, “It’s a blessing in the sense that we think we really have a good understanding of how the fundamental physics works, and that’s encompassed in the Standard Model, which has been around more-or-less complete since the early ‘70s…It’s a curse because we…got the theory 40 years ago and all we’ve been doing is proving that it’s right. What we really want to do is prove that it’s wrong.”

The Higgs particle was the last piece needed to complete the Standard Model, which means physicists are now able to go on to their next task of challenging the Standard Model – expanding
the theory to include phenomena it can’t explain, including dark matter, dark energy, and the mystery of why we have matter and not antimatter in the universe.

Stenson explained that “the Standard Model is an effective theory at low energy, but maybe at higher energy it breaks down. Much like Newton’s theory of gravity worked just fine for understanding how planets orbit and how apples fall from trees, but Einstein’s general theory of relativity moved beyond that theory of gravitation to understand cases where there exists extreme gravity.

“We have the Standard Model, which seems to work fine so far, but we’re hoping that if we go to higher and higher energies maybe we’ll produce particles that don’t exist in the Standard Model. That would be a great thing,” Stenson said.

Higgs resonated in the world outside of CERN, too, in part thanks to a popular science book by Leon Lederman, according to Cumalat. Lederman, a recipient of the 1988 Nobel Prize in Physics, wrote a book about the quest to find the Higgs, called The God Particle. “The interesting part of that story is initially he [Lederman] went to his editor and wanted to call it the ‘Goddamn Particle’ because they couldn’t find it. And they said, ‘No, you can’t do that.’ And so it’s called the God particle,” Cumalat laughs.

What’s Next for CERN: the Search for WIMPs and Parallel Universes

The Higgs might have completed the Standard Model, but that doesn’t mean the work at CERN is over. Now, the ATLAS and CMS experiments are working on Stenson’s aforementioned goal of expanding the Standard Model to explain high-energy phenomena.

Part of the quest is to understand dark matter. Stenson says, “there’s a lot of evidence from cosmology that dark matter exists,” but that physicists know very little about it. “The only thing we know about it is that it interacts gravitationally…[and] it doesn’t have an electric charge,” he said. “It’s not made up of the normal things stars and planets are made up of.”

The cutting-edge machinery at CERN allows the scientists to see and measure WIMPs (weakly interacting mass particles theorized to be actual dark matter) by smashing particles together and seeing what matter is missing after the collision. “You add up all the energy in the event and you say, ‘There’s a big hole going this direction. That could be a WIMP,’” Stenson said. Of course, it’s never truly that easy; the missing matter could actually be commonplace neutrinos escaping, or could only appear to be missing due to a technical issue with the incredibly sensitive equipment.

As scientists are learning more about the Higgs and the Standard Model, they are also trying to destroy existing paradigms of physics, to understand how time and space unfold. There has been a lot of coverage recently of how the Higgs may shed light on parallel universes and the multiverse theory, whereby there are an infinite number of universes. It should be noted that the LHC has not found any evidence as of yet for these theories. However, the fact that they are actively looking for them (and that, if they will be discovered, it will happen at the facility) only adds to mind-warping nature of this work.

Even though the Higgs particle seems too small to truly understand, and the LHC too massive to fathom, Stenson and Cumalat stress that physics is about solving the mysteries in the world around us. “I think all physicists in some sense are reductionists. We’re trying to understand the most fundamental aspects of how the universe works,” Stenson said. The LHC is not simply a team of scientists using flashy equipment to chase after one particle; it’s humanity’s most comprehensive attempt at trying to understand the nature of our universe.